I’m Brian and my journey with Maria has been a great one. It started two and a half years ago (January 2015). We met by accident a couple of weeks before I had a quadruple bypass, which I didn’t know I was going to have, so it was just a funny way.

I met Maria just because of her personality, the way she is and we met in a Costco. I didn’t quite understand what she did after we spoke, but I knew I wanted to work with her.

She handed me her card and I said “the card is great but I want an appointment. I don’t know what you do, but I want some.” I came over a few times and during that first couple of weeks, I’ve found that I was having the quadruple bypass surgery. So I was in.

Maria helped me with supplementation to help muscles and the bones to heal. We talked about nutrition before and post the surgery. The surgery went well, God got home and Maria came over after a couple of days and we started working out with stretches. We got a massage table after a few days to facilitate stretching and a little bit of working out. 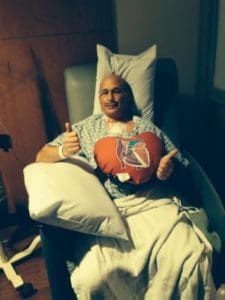 I was pretty good before the surgery, I didn’t have a heart attack, but I was weak after the surgery. We started working on with a can. She would come over three times a week to help me with stretching and other movements, nutrition and other supplements.

So from the very beginning, I did what she said and exercised. She probably came over for around six weeks until I was clear to come to her facility and work out in a very good gym.

I go backpacking each year at higher elevations. The year of surgery would be our 15th year. My guys came over after a few days I was out of the hospitals and said, “Hey Brian, we’re going this year.” I replied “Great, you all go.” He said, “No, we’re not going without you.” So I said, “OK.” 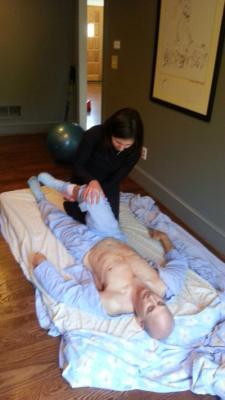 Maria got me ready in six and a half months to climb a 12,000-foot mountain, which was a great accomplishment.

Some of the movements we did included were box steps, use of backpack to help be able to get up. I was still hurting from the surgery. And that was six and a half months post-surgery. It’s been two and a half years after my surgery (July 2017), we work out several times a week we go over nutrition, lifestyle, and supplements. I’m feeling great and getting ready to do another mountain.

Another good thing that Maria does is keeps up with my numbers (blood tests) from the regular doctor and the cardiologist. That way she can help me with my nutrition, which has really helped. The numbers came back and Maria suggested a 21-Day cleanse program. My wife also was interested in doing the cleanse, which was easy. We did the two shakes a day, which Maria taught me how to make and I’ve been doing for a couple of years using the Vitamix.

The cleanse and supplements has all the ingredients to get you going and keep you healthy. The cleanse just helps you really appreciate two shakes a day and vegetables for lunch. My wife did and after three days she already just felt so much better. The inflammation of her hands and face and so forth were gone. And after a week she lost weight. She looks and feels great. She’s continuing and we couldn’t be happier being healthy together.

As far as Maria as a coach…I think it’s hard to find someone that is caring, is for you, wants that success for you, and is able to give you all the tools and things you need to be successful. The coaching itself, beyond the nutrition, supplements, and exercise, having someone to keep you mentally there and keep you going on track and accountable.

That’s why you want a good coach because there’re certain times in those months and years that you get those dips. Somehow Maria is able to lift me up and keep me going. You really need that when you’re trying to overcome an illness or just want to be healthy, in shape or change your life. You need somebody to help you accountable and Maria is great at that.

Schedule a [Complimentary] Online Group Personal Training Session HERE. Use coupon: groupweb. No equipment needed. Do it with a smartphone, a tablet, or another device with a camera/webcam and internet.

Schedule an Energy Audit HERE. What’s that? It’s an opportunity for you to share your goals, dreams, and concerns, get healthy tips and discover a strategy to achieve your goals with confidence. We’ll do this via video conference or phone. 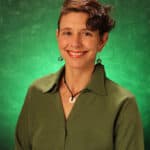 I empower driven, health-oriented professionals to get to the bottom of their health and weight issues so they can restore vitality while supporting the body's innate healing abilities. >> Become Happy In Your Own Skin So You Exude Vitality And Joy! >> You Need A Healthy Body To Have a Healthy Weight!